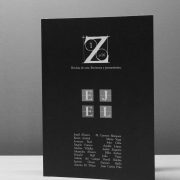 The first issue of Zéjel: Art, Literature and Thought Magazine, is now a reality. Just a few days ago we got our hands on the volume fresh off the press, and we can hardly resist sharing it with you. For that reason, we’ve organized the presentation of the first issue in the small Sevillano palace, Casa de las Sirenas (House of the Mermaids,) situated in the heart of the beautiful Alameda de Hércules neighborhood of Seville.
The date chosen for the presentation is Thursday, September 29. At the event, you will not only be able to purchase a physical copy of the magazine, but also experience a special opportunity to meet the diverse authors that have published in the issue and will recite some of their creations live. What’s more, one of the original translations of Donald Hall‘s poetry will be recited, and the selected photograph by artist Adrián del Campo from the «Visual Arts» section of the issue will be presented. We would love to have you at what will be the first public act of the magazine.
https://revistazejel.com/wp-content/uploads/2016/09/lib.jpg 1560 1365 Revista Zéjel https://revistazejel.com/wp-content/uploads/2020/03/logo-01.png Revista Zéjel2016-10-25 21:30:242022-06-15 19:22:05Presentation of first issue

Last Thursday, 19, we presented the first issue of Zéjel: Art, Literature and Thought Magazine, in the house-museum Casa de las Sirenas (House of the Mermaids,) located in the heart of the beautiful Alameda de Hércules neighborhood of Seville. It was a great pleasure for the whole team to see the interest that Zéjel stirs in the public, and to be able to share with all of the attendees the physical issue, a publication that represents the materialization of months of work and the beginning of what we hope will be a long-lasting endeavor.
Several poets from Issue I joined us at the event, such as the featured artists from the «Visual Arts» section, and Antonio M. Vileya, whose review of Miguel Floriano can also be found in the magazine. We can’t forget about all the other excellent artists who collaborated on this issue but found themselves too far from Seville to make it to the event.
At the presentation, the editors Juan Carlos Polo Zambruno, Narciso Raffo Navarro, David Roldán Eugenio, and although not physically present since she is currently in the United States, Julia Vasta, presented the project and made public the first physical issue of the magazine.
Afterward, several participating poets recited their published texts, turning the presentation into more than a mere expository act of the contents of Issue I, but a poetic event in itself. We projected a recorded recitation of one of the two new original translations of Donald Hall‘s poetry, and concluded the first public act of Zéjel: Art, Literature and Thought Magazine with a presentation of the featured photograph of the «Visual Arts» section of Issue I.
https://revistazejel.com/wp-content/uploads/2020/03/logo-01.png 0 0 Revista Zéjel https://revistazejel.com/wp-content/uploads/2020/03/logo-01.png Revista Zéjel2016-10-25 21:21:222022-06-15 19:22:05We presented the first issue

In this first issue of Zéjel we have the great honor of including in the section Invited Poet a selection of poems by the American writer, poet and literary critic Donald Hall.

As such, Zéjel has met one of its more ambitious goals: to include the work of a writer of renowned international recognition within the first few issues. In September, the magazine will feature its first publication along with a Spanish translation of the poem «Ruins» by Hall. Thanks are due to the collaboration and generosity of the American publisher Houghton Mifflin Harcourt, who has given us permission for the original poem in English to publish an original, unpublished translation for the first time.

Donald Hall (Hamden, Connecticut, 1928) was influenced from an early age by the works of Edgar Allan Poe and was a precocious writer, publishing his first poem at age sixteen. After graduating from Philips Exeter Academy, he enrolled in Harvard University and later the University of Oxford. During these early years he won the prestigious Newdigate Award for his poem «Exile.» From 1953 to 1961 he was the first poetry editor for the Paris Review and in 1957 he began to teach classes in English language literature at the University of Michigan, where he would meet his future wife and fellow poet Jane Kenyon. He has won countless awards, such as the Leonore Marshall/Nation Prize for his poetry book The Happy Man (1986), the National Book Critics Circle Award for The One Day (1988), as well as the Los Angeles Times literary prize and the Ruth Lilly poetry prize, among others. He has served as the Poet Laureate of the United States, as well as that of the state of New Hampshire. Currently, Hall resides in Wilmot, New Hampshire in his grandparents’ former farmhouse, the source of inspiration for many of his poems.

His involvement in the academic world and the richness and variety of his body of work have led him to be considered one of the greatest writers of his generation of American literature of the 20th century.

«Ruins» brings us the perspective of a man who lives through another person. The landscape and the home are revealed as spaces of solitude and painful introspection upon the assumption that that other person is content living separate from the narrator, happily moving with the inertia of their everyday life. «Ruins» shouts for those nonbelievers who are trapped in their own past and who, through the eyes of others, have been reduced to nothing but distant rubble.

Zéjel is an art, literature and thought magazine focused especially on the field of poetry and directed and consulted by young people, with a deep affection for artistic and universal literary tradition and creations yet to come.

Poetic composition, the visual arts and essays are its three pillars, but they are the translated works of foreign poetry – and thus the contribution to their diffusion in the Spanish-speaking world – and the included work of an experienced poet with a renowned literary career path that define our innovative spirit and push us to build a new model of literary and cultural inspiration in southern Spain.

Zéjel is a defense of artistic creation, a continuing recognition of the exercise of thought between young artists and readers. Chronicling the different curiosities and experiences of our collaborators, we aim to join tradition and innovation, the languages of both ancient and new eras alike.

This website uses cookies to improve your experience while you navigate through the website. Out of these, the cookies that are categorized as necessary are stored on your browser as they are essential for the working of basic functionalities of the website. We also use third-party cookies that help us analyze and understand how you use this website. These cookies will be stored in your browser only with your consent. You also have the option to opt-out of these cookies. But opting out of some of these cookies may affect your browsing experience.
Necessary Siempre activado
Necessary cookies are absolutely essential for the website to function properly. These cookies ensure basic functionalities and security features of the website, anonymously.
Functional
Functional cookies help to perform certain functionalities like sharing the content of the website on social media platforms, collect feedbacks, and other third-party features.
Performance
Performance cookies are used to understand and analyze the key performance indexes of the website which helps in delivering a better user experience for the visitors.
Analytics
Analytical cookies are used to understand how visitors interact with the website. These cookies help provide information on metrics the number of visitors, bounce rate, traffic source, etc.
Advertisement
Advertisement cookies are used to provide visitors with relevant ads and marketing campaigns. These cookies track visitors across websites and collect information to provide customized ads.
Others
Other uncategorized cookies are those that are being analyzed and have not been classified into a category as yet.
GUARDAR Y ACEPTAR